THIS…. IS…. FINCASTLE!!!!!!  And we are a peaceful folk.  Tonight, we dine in… probably Country Cookin or Subway.  The other place is a little hot for our tastes.  Sorry, Leonidas.  No “Hot Gates”, no sending young warriors off into the wilderness to toughen up or die, and definitely no running around in leather underwear and a cape.  We don’t have the abs for that.  What we do have is the Fincastle Pokemon Gym, one of

the most unique leagues in the country, possibly the world.  The centerpiece of the Gym is the Gym Leader Challenge.  After completing 2 rows on a league/season scorecard, any trainer is eligible to sign up for the challenge of his choice, a best 2-of-3 match against a single type deck (grass, fire, water, etc.) that could net you a custom designed badge, if you win, and put you on the path towards becoming League Champion, a task that no one has achieved yet.

Winning a badge at the Gym in no easy task.  Despite normally giving up the type-advantage, the Gym Leaders answer these challenges with very competitive decks, backed by what has now become years of experience in playing against the best competition in the country.  Anyone who has attempted a challenge knows 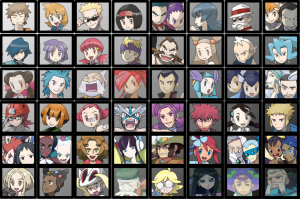 how mentally demanding and exhausting they are, especially to come as close as many trainers have come to winning a badge before falling short by a turn, a card or a coin flip.  Being fully aware of this, the Fincastle Gym has celebrated its onslaught of trainers pursuing this goal by adding some pretty sweet incentives along the way.  It has become tradition to offer a special prize at every 100 challenges to the trainer that completes that challenge, win or lose.  At #100, Chris L was awarded a promo HGSS binder with a collection of every league promo card up to that date.  #200 saw Addison M get a promo binder with a huge collection of EX and “full art” pokemon cards.  We knew we had to up the stakes for #300, which we did, plus a little.

Not knowing that he was #300, Isiah M took on Gym Leader Marthe for the Psychic-type badge.  Isiah seemed to be cruising along on game 1, until he ran into the gym leaders Sigilyph, which blocked his mighty Yveltal EX, allowing Marthe to come back and take the game.  Not deterred, Isiah responded by quickly taking game 2 on a 2nd-turn “donk”, forcing a 3rd game.  Marthe and Isiah both set their field and exchanged attacks during their last game.  However, Isiah could not dig out the resources to keep up with Marthe’s Mewtwo EX/Gardevoir deck, which builds ridiculous momentum the longer it goes.  Marthe took the 3rd game and congratulated Isiah on a strong challenge.  Isiah returned to the table at league, still not knowing what he had done.  At about 5pm, when league starts to wind down, we made the announcement that Isiah had completed #300.

Isiah was awarded a custom built Plasma Lugia deck designed jointly by Gym Leaders Logan and Joel and then tested in the online TCG (to the tune of 17 wins and 0 losses).  Included with the deck were 100 white “Dragon Shield” sleeves and a Pokemon duel deck box.  We threw in a few printed deck lists for future tournaments and will also provide some 1-on-1 lessons in playing the deck over the next few weeks.  Isiah has been with the Gym for a while and is a very sharp player.  The prize couldn’t have gone to a better kid and we at the Gym hope he enjoys playing it and that it nets him lots of success at future events.

So, how do the Gym Leaders stand after 300 challenges?  Lets take a look at some numbers.  The leaders sport on overall record of 253 wins and 47 losses, which works out to an 84.3 winning percentage.  The 47 losses have come at the hands of 22 different trainers, of whom, only 9 are still active members of the Gym.  Hunter H remains the only trainer to defeat all 9 gym leader decks.

Gym Leader Marthe follows closely behind Joel in the number of challenges fielded, at 94.  Marthe commands the Psychic and Lightning-type decks and has also stepped outside of her assigned decks to field both Grass and Dragon challenges.  Her Psychic-type deck remains the most challenged deck at the Gym with 57 challenges.  Marthe’s overall record is 75 wins and 19 losses (79.8%).  By type her records are:  Psychic (48-9), Lightning (27-8), Grass (0-1) and Dragon (0-1).

Gym Leader Logan holds his position as the most difficult leader to defeat.  Logan is the master of the Water and Dark-type decks currently.  He also helped take turns defending the Fire deck in the early months of our league, a task that was taken over briefly by league trainer Austin W, eventually returning to Gym Leader Joel.  Logan sports an overall record of 53 wins and 4 losses (93.0%).  Logan’s record by deck looks like this:  Water (33-1), Darkness (18-2) and Fire (2-1).

Gym Leader Georgia has proudly taken on the role as the Dragon-type gym leader and likely will take over the role for the new Fairy-types once we get something worked out with badges for that type (and Pokemon gives us a few more cards to choose from).  As the Dragon leader, Georgia has 10 wins and only 1 loss (90.0%).

Former Gym Leader Austin rounds out the crew and the numbers, winning 13 times and losing only 1 time as the Fire-type leader.  Individual gym leader decks have seen some major changes over the years, with format changes and card rotations swinging the effectiveness of each deck back and forth.  There have even been brief periods where the format did not allow enough card support to field a competitive deck.  We often scrap existing decks for new ideas following losses in challenges.  We try to offer an interesting mix of decks for players to challenge each week, which we feel we do.  All told, with the mix of defenders, here is one last look at the overall records of each deck.

And so begins our march towards #400.  Prepare for glory!  Haroo!  Haroo!  Haroo!  We are sure it will get here quicker than you think, so we at the Gym will go right to work on ideas for the next prize.  Even more vital will be the search for movie and TV references towards the #400, which will undoubtedly be more difficult than it was for #300.  Sign up for the leader of your choice and then when you are ready, find that leader and let them know you are ready to battle.  We can’t always do the

challenge when requested, depending on what is going on a league, but we will get to the challenge as soon as we can.  Practice and fine-tune your deck so that you can grab a place on the Wall of Fame.  Its been a fun 300 and we are sure the next 100 will bring some exciting wins and excruciatingly close losses for many of our trainers.  Either way, have fun and we’ll see you at the Gym!

Gym Badges Earned (aka, The Wall of Fame):

*players in BOLD have won all 9 badges