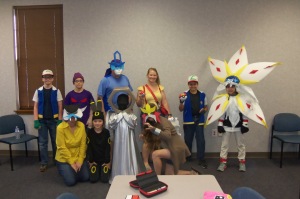 Sunday, Oct. 21 at the Fincastle Pokemon Gym was quite the busy day.  We opened with a Mid-Season Showdown, a video game tournament that falls between the levels of local Premiere Challenges and Regional Championships.  As that event was entering its Top 4 playoff, players arrived and began to open their Lost Thunder pre-release packs and prepare for the fun tournament.  Several of those players came in costume to vie for the title of costume contest champion.  As always, we were amazed at some of the entries.  Lets look at all of these events and see how things turned out.

The Mid Season Showdown had a nice turnout of some very competitive Masters.  They played 4 rounds with a Top 4 cut.  Juniors and Seniors combined into the Masters field (one more of either and they would have played in a separate draw).  In route to winning her division, Anna R,

the lone Junior, took out a Master and 2 Seniors, only losing to her brother, Ridge, who won Seniors.  We recently learned that we are eligible for 2 MSS tournaments in each portion of the 2018-19 season, so stay tuned for details on future events.  Here are the final standings of the October event.

As the costume entrants joined the party at The Gym, we noticed the absence of several of our perennial best costume makers.  We understand that one of these had a mix-up on the days.  We don’t know about a couple others, but we hope they were not turned around on the dates as well.  We normally post event dates on a bulletin board at The Gym, however, we urge all trainers to check both here and on our Facebook to verify dates of events.  With that being said, let’s check out some of the amazing cosplayers that did enter this year. 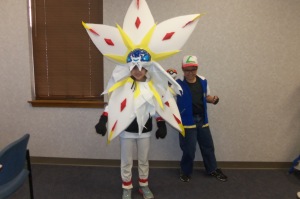 We’ll start at the top.  The overall winner was, Angelina S, who came as a partner with John H, who dressed as Ash.  While the combo will likely work very well at the upcoming Regional (where there is a group/team category), the Gym’s contest judges entries individually.  Angelina blew us away as we saw her approaching the library.  Once we saw the costume close up, we knew it would take something amazing to beat her.  Angelina received the Legends of Johto GX box as the overall winner. 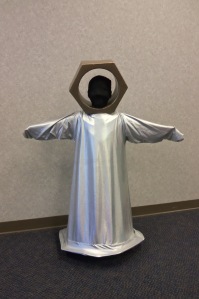 Very close behind her, claiming the prize for the best Junior, was Rory G, who came as the mysterious new pokemon, Meltan, discovered in Pokemon Go.  As always, Rory’s costume was equally amazing and well crafted.  The crafter of said costume, Emily G, claimed the Master Division prize as Misty.

To stick with the theme, Gym Leaders Joel, Marthe and Georgia brought the Legends of Johto to life.  We continued the fun on Monday at our Lexington league, where we did not officially hold a costume contest.  However, we thought there might be

couple contestants getting ready for Roanoke.  While we were there, we discovered a sleeping Snorlax and a creepy little ghost that wishes it were Pikachu.

We had great fun at all of the events this weekend.  We hope they are a sign of great things to come as we get closer to our 3rd Regional Championship over the weekend of November 23-25.  Check out the slide show below to see more photos.  We will hold league at our normal time this Sunday, 11/4.  We hope you all had a Happy Halloween.  See you at The Gym!